Highland had at least one notable/notorious landmark. Where 10400 North traverses Mitchell Hollow, at about 6500 West, there was a culvert under the road where the Harmon ditch flowed. This culvert was right at the brink of the hill and thus the road didn't have a smooth transition from the hollow to the flat. When built, the roads were gravel and transportation was by horse and buggy so there was nothing unusual about it, but with the advent of cars and later, pavement (which came in 1947) and higher speeds it became a "problem". Travelling Eastbound the road would disappear from under your car and you would bounce down the hill a bit-of course the higher the speed the farther you would travel before landing. Westbound was not as dramatic at the same speed, except that you would be unable to see the road ahead of you and didn't know for sure where you were going to land until you did. 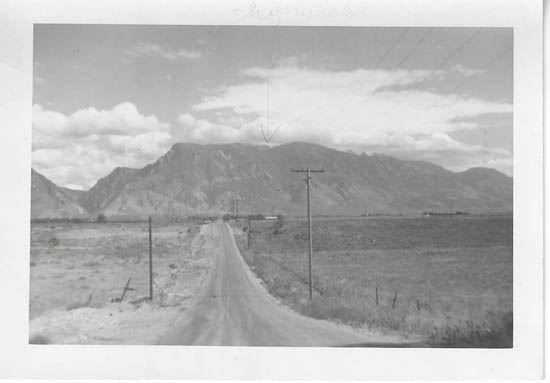 This feature became variously known as the "thrill hill", "Highland dip", "Highland bump" "Highland Whoopee", "Whoopee Hill" and "Highland Fling" (long before the City named its annual celebration), and people for miles around would come to experience the thrill. Since I lived on the brink of that hill I was very aware of some of the escapades of those people. We would be awakened at night (generally a Friday or Saturday) by the crashing down of a car, often with some metal part broken off and clanging down the road, then in a minute or two a return trip. They would make U turns at 6800 West and at 6400 West. This would go on for as many as five or six round trips, then maybe another car would take its' turn. I imagine top speeds were mostly in the 60 mph range (although I heard of someone doing it at 85). Standing on my front lawn during the day when such events occurred I could see the total undercarriage of the westbound cars as they flew through the air. The road in front of our house was heavily grooved by bumper guards or other car parts as they slammed down on the pavement.

We could hear the screams of the passengers and occasionally, a school friend would go by and yell out, "Hi, Charlie" or "Hi, Leonard" (my brother who also lived with us). Then at school the following week they would tell us of their adventure.

My mother was disgusted at such antics and was always afraid someone and their car was going to end up in our house, but in the fifteen years I lived there (1948 to 1963) I never heard of a crash or serious injury, even though this was before seat belts and the occupants of the vehicles must have been thoroughly shaken and stirred.

There was one accident in the hollow in September, 1941 wherein Reuben Buhler was seriously injured and died a couple of weeks later but it didn't involve a thrill seeking ride.