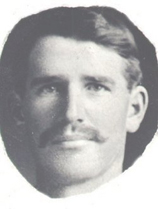 They were among the first ward members in 1915 and she is listed as a Sunday School teacher that year. She was born January 13, 1883, in Orderville, Utah Territory to George Asael and Lucity Stolworthy Palmer. She was a sister to Cora Palmer Strasburg (q.v.). John was born in Fruitland, New Mexico, October 13, 1882, to Luther Clinton and Mitilda Barnett Burnham. They were married October 9, 1902, in Salt Lake City, Utah, and later sealed in the Salt Lake Temple.

The following children were in their family but some are likely his children by his second wife, Minnie Stenblom: Matilda, Phoebe Faye, Phyllis, Rose, Lucille, Amelia, Eugene Kipling, Rex Merrill, Joseph W., and L. Acel. In 1910 they were living in Union, Oregon, and in late 1915 she was living in American Fork and gave birth to a daughter. By 1920 she was in Pleasant Grove and divorced. She died September 17, 1962, in American Fork and is buried in the Pleasant Grove City Cemetery. [Find a Grave] [Names in Stone] John died June 1, 1931, in Lake County, Oregon and is buried in the Westside Cemetery in Lakeview, Oregon. [Find a Grave]