Leland was born November 21, 1906, in Bates, Idaho to James Henrie and Hadden Maria Wood May. He went on a mission to the Northern States in 1928, returning in April, 1930. He met Lola Lunbeck soon after his return and they were married September 9, 1931. Lola was born January 29, 1914, in Jackson, Wyoming to Otto Lake and Rhoda Viola DeLoney Lunbeck. They first made their home on the May ranch at Grovont (Gros Ventre), Wyoming for nine years. In 1932 Lola's mother passed away giving birth to her daughter, Viola, so Lola was given the baby to raise, but the baby only lived ten months and died January 4, 1933.

In 1940 they leased a ranch in Moran, Wyoming, on Jackson Lake. They had four children while in Wyoming: Leola, James, William, who died at 2 ½ months, and Thomas. In the fall of 1943, they sold their farm and moved to Highland (Number 58 on the 1958 Highland map) where three daughters were born to them: Anita, Catherine, and Wilma. 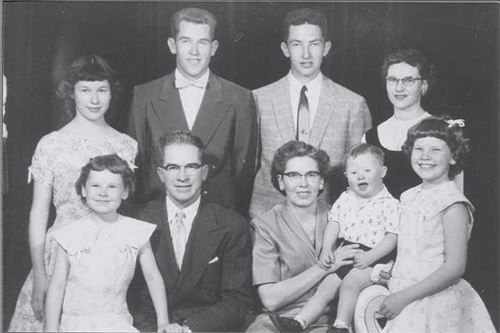 During their nine year stay in Highland they were very active in Church and in entertaining their friends and neighbors. Leland had a beautiful singing voice and Lola played the piano and the older children were musically inclined also. Leland was superintendent of the YMMIA, filled a stake mission, was a president of the Seventies Quorum, Ward Teacher and member of the Stake High Council. Lola was counselor and president of the YWMIA, Relief Society President in 1951 with Thelma Chidester and Marie Larson as counselors and Eloise Ferguson as secretary, and held many musical positions.

Leola and Jimmy graduated from American Fork High School and both attended BYU. Jimmy took the lead in a three-act play produced by the MIA: "Rings in the Sawdust".