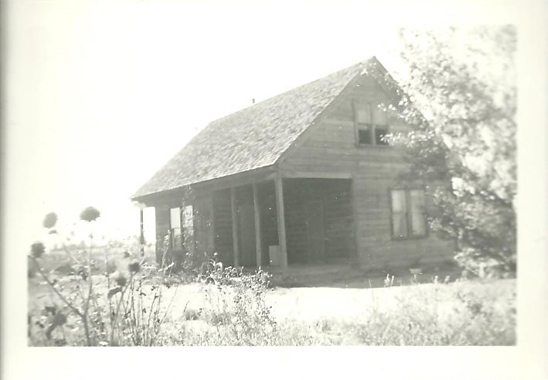 A person by this name purchased Number 9 (on the 1958 Highland map) from Lytles in about 1953. The only person who seems to fit is Avis Annie Mills Smith. She was born December 23, 1893, in West Jordan, Utah to Joseph Heber and Annie Rasmussen Mills. She married George LeRoy Smith on June 14, 1916, and they lived in Pleasant Grove for many years. He was born April 21, 1894, in Pleasant Grove to Samuel H. and Elizabeth Ann Meadows Smith. It is not known for sure that they ever lived in Highland.

Hyrum was born in Highland, Utah, June 5, 1891, the youngest child of Peter and Ellen Pryor Smith (q.v.). Hyrum was baptized June 20, 1898, during the time they were attending church in the Highland school, which consisted of two rooms. As a young man he worked for the Beck family in Alpine, herding and tending their pigs. He married Birdie Estella Mitchell on October 5, 1910, in Lehi and they were sealed May 12, 1921, in the Salt Lake Temple. Birdie was born April 30, 1893, in Lehi, Utah Territory to John Willard and Sarah Ann Slater Mitchell. She had six brothers.

They made their home in Highland with his mother (Number 24 on the 1958 Highland map) until their first child was born, then they moved to Carbon County where Hyrum worked as a fireman on the Union Pacific Railroad. They had two more children while living there. They moved back to Lehi and Hyrum rode a horse to Highland every day to do the farm work. Then in 1919 they moved into the two room addition his mother had previously built for his brother, Joseph (q.v.) and the three children: Sarah, Mary, and Junius Earl went to school in Highland.

Hyrum's mother, Ellen passed away in 1925 and he moved back to Lehi. He worked at hauling coal for Bingham, at Interstate Brick in Salt Lake City and at Geneva Steel. He died October 29, 1962, in Lehi and Birdie died March 12, 1968, in American Fork.

James was another brother to Joseph, Hyrum and John (q.v.). They lived in Highland only a short time but it's a roundabout story. Martha was born October 18, 1884, in Salem, North Carolina to Charles Clark and Emma Caroline Davenport Eves. She married Elisha William Edney May 5, 1901. He was born April 10, 1880, in South Mills, North Carolina to Benjamin Franklin and Katherine Bright Edney. They had four children: Robert Lee, Vera LaRue, Emma Verna, and Gladys. Elisha died February 27, 1905, in Lehi-about seven months before his last daughter (Gladys) was born.

Martha married James Smith June 23, 1909, and they lived in Lehi, then moved to Highland in 1916 and by 1920 they were in Wellington, Utah and in 1930 in Helper. James was born July 1, 1881, in Weeksville, North Carolina to Peter and Ellen Pryor Smith (q.v.). They had six children: Ruby Ellen, Amelia Caroline, Minnie, James A, Martha Elizabeth, and John Eugene. James died of throat cancer December 15, 1919, in Highland, less than a year after John Eugene was born. Martha died May 1, 1959. 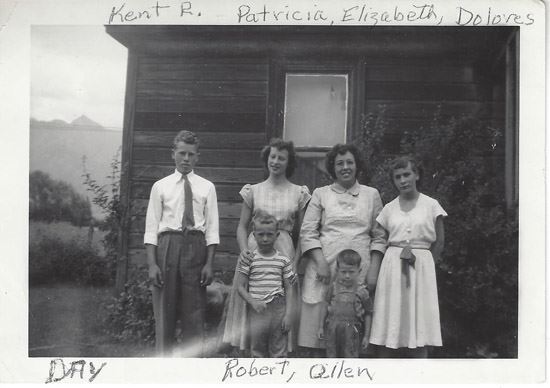 John and Annie were living in Highland at the 1930 census, probably at Number 15 (on the 1958 Highland map), with two children, Margaret and Glen Dale plus John's stepdaughter Pearl Luella Hopkinson and a niece, Marelda Hitesman. Two other children were born to John and his first wife: John LaVere Jr. and Anevin Ulesa. Both children died very young. John and his second wife had a child, Beth Morris. John died February 11, 1958, in Ogden at the Utah State Tuberculosis Hospital, and is buried in Lehi with his second wife. Annie died in March, 1968.

Joseph was born November 29, 1886, probably in Salt Lake City, to Peter John and Ellen Pryor Smith. His parents (q.v.) were some of the original homesteaders in Highland. Jane was born April 27, 1890, to Henry W and Eliza B. Kemp. Joseph's father died in 1907, after they moved to Highland and Joseph had left home, but he returned with his wife and daughter to take care of the farm and animals.

They built a two-room addition to his mother's home for them to live in (Number 24 on the 1958 Highland map). On a bitterly cold night, December 28, 1915, they placed a tub of hot coals in the middle of their bedroom to keep them warm. When his mother came to wake him the next morning to do chores, all three were dead of asphyxiation. They have a single tombstone in the Lehi City Cemetery with all three names which reads: "Death being caused by gas fumes from a few hot coals". The daughter was Ida Laverd (per tombstone, Laverde per Church record), born May 11, 1912. 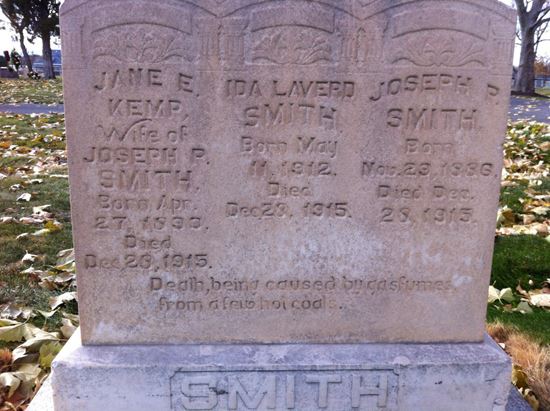 The Smith's were both born in Scotland - Peter in Glasgow July 16, 1843, and Ellen in Yieldshields-Carluke on March 15, 1855 - and were married June 3, 1875, in Ayrshire. Peter's parents were Peter and Jane Rankin Smith - Ellen's were John and Jane Watson Pryor. They joined the Church of Jesus Christ of Latter-day Saints and migrated to America in 1882 and settled in Salt Lake City. It is unknown when they came to Highland but their youngest son was born in Highland in 1891 and they were there at the censuses of 1900, 1910 and 1920. Peter is one of three men from Scotland credited with naming Highland. They homesteaded the 160 acres north of George Munns in the far northwest corner of Highland (Number 24 on the 1958 Highland map) and had six children: Peter, John LaVere, James, Jane, Joseph and, Hyrum Junior. 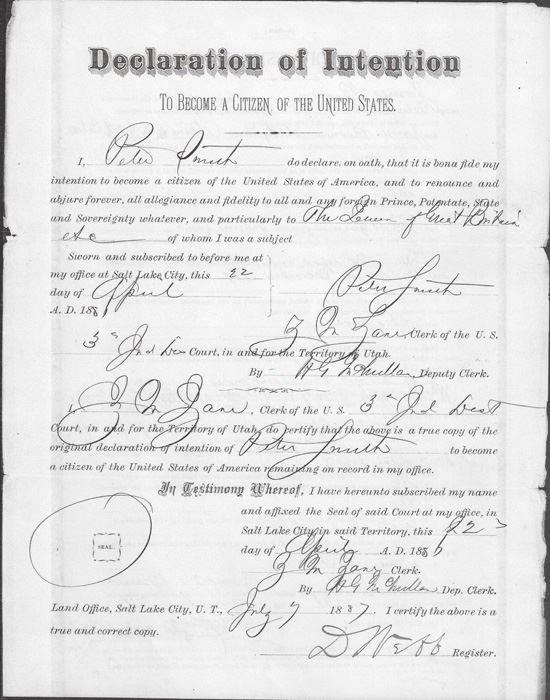 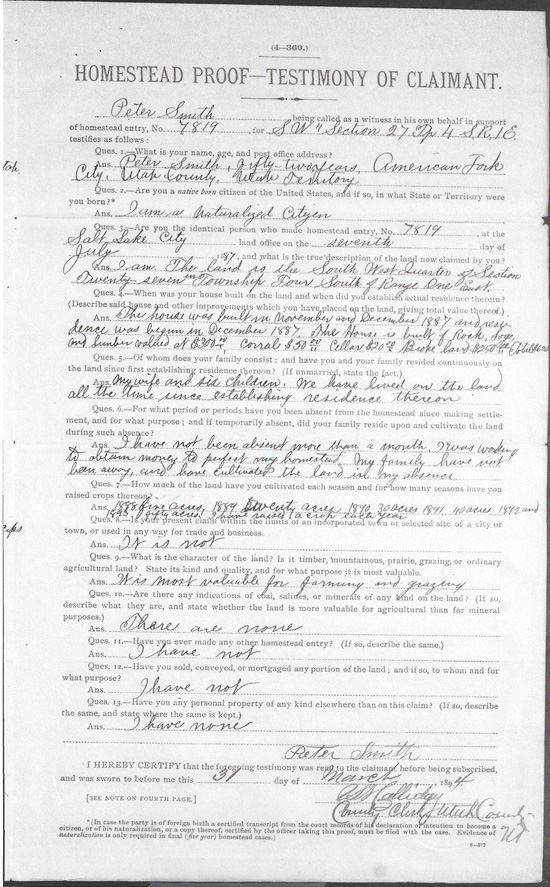 Peter previously married Margaret Richmond on March 8, 1867, and they had a son, John Richmond Smith. Margaret died August 13, 1868 and John died before the age of five.

Peter died December 20, 1907, in Highland but Ellen continued to live here with 2 of her sons, Hyrum and Joseph. Ellen died November 28, 1925. They are buried in the Lehi City Cemetery. 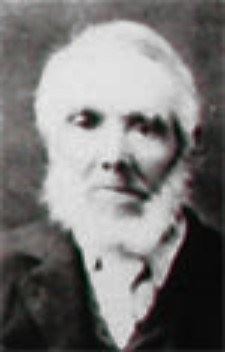 This is a later entry because an indexing error showed his name as Patrick and no one could be found by that name.  Robert was born in Upholland, Lancashire, England on July 1, 1830 to Thomas Banks and Ann Smith.  Ruth was born March 11, 1829 in England to James and Ann Atherton. They were married July 30, 1854 in Wigan, All Saints, Lancashire.  They had eight children: Ann, Ellen, Richard, Elizabeth, Rachael, James, William and Thomas.

The 1881 census showed them living in Upholland with five of the children: Richard and the last four.  Ann had married in 1878, Elizabeth whereabouts were unknown and Ellen had gone to America in 1877.  She married William Walker (q.v.) in1883.  Robert was working as a coal miner.

They came to America in 1883 and settled in Highland, living there for more than 25 years.  Their oldest son, Richard came to America in 1881, married and lived in Lehi.  In the 1900 census they were living in the NE section of Highland with their son, William, and Robert was listed as a farmer.