Peas and Peaviners in Highland

PEAS AND PEAVINERS IN HIGHLAND

In the 1940's through the 1970's, peas were an important crop in Highland. There were a number of canneries around the State that contracted with farmers to raise a certain number of acres of peas and they guaranteed to buy what the farmers raised.

Early in the year the canneries would send their field men out to contract with the farmers and they would then monitor the farms through seeding, fumigation, irrigation and harvest. The farmers had to be ready to harvest their peas at a moment's notice when the field man determined that they were ready. The peas were of a variety that matured all together – unlike the garden peas we raise that mature over a 2 to 3 week period.

Peas were planted with a grain drill that had been re-sized for the peas. Peas had to be irrigated on a regular basis but in Highland the interval varied from seven to twelve and one-half days. Pea plants grow straight and tall for the first two or three weeks then they fall over because they are weak stemmed so they were harvested by a mowing machine, generally with an attachment of a series of curved tines to pile them in a windrow for easy pickup. Then men and boys used pitchforks to load them onto wagons or trucks. The vines were much heavier than hay so it was a lot harder work. The harvesting was usually done at night so as to have the peas at the viners when they began working at 4:00 a.m. or earlier, often operating 24 hours a day. The pea season usually lasted about three weeks and, depending on the weather, would begin in early-mid June and sometimes run past July 4. There were times that Church was cancelled for one or two weeks during the harvest because so many were working. 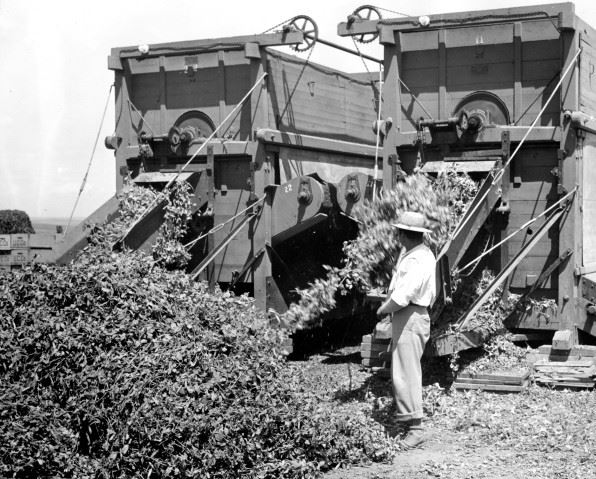 The viner was a large box with a heavy wooden frame (some had a metal frame and were rounded at the top) about 15 to 16 feet long, 6 ½ feet wide and 12 feet tall, weighing more than 4 tons and each viner could process 3,000 to 5,000 pounds of vines per hour. Enclosed within was a rotating drum, 6 feet in diameter enclosed in screens with holes large enough for the shelled peas to fall through. At the front was a conveyor with 6 inch hooks that carried the peas into the drum. Paddles in the drum, much like a clothes dryer, lifted up the peas on vines and dropped them on a faster rotating beater which broke the

pods open, letting the peas fall out and through the screen. The peas fell onto a canvas conveyer (called the apron) that was the full length of the drum and moved upwards on an incline and the peas rolled down against the movement and into bins. The apron collected small pieces of pods and vines that went through the screen and carried them up to drop them off at the back of the viner. The bins had sliding bottoms that opened to let the peas drop into bushel boxes that were then loaded onto a truck to go to the cannery. The spent vines were carried by another conveyor to the stack, where men and boys placed them so as to build a straight stack that wouldn't collapse.

The peas would arrive at the viner on trucks or wagons (mostly) pulled by horses or tractors. The farmers would leave them there and go back for another load while their employees would pitch the peas into the viner. The loads would be from four to six feet high and it could take up to two hours to empty a wagon, then it was pushed out of the way and another pulled in.

The cannery field man was usually responsible for hiring the crews that ran the viners and, separately, to contract with others to stack the vines. The stackers were paid a lump sum, per their contract, rather than an hourly wage. The farmers were responsible for hiring those who pitched their peas into the vinery. The viners provided work for just about every man and boy who wanted a job; including the very young. Working on the stack was the dirtiest job and the workers would come home smelling badly, with stiff and putrid clothes. Other workers were able to keep cleaner but the smell was pervasive.

My first work in the peas was when I was twelve and worked on the stack at the Eddington viner. My brother had contracted the stack and hired me and Gary Adamson to assist. For payment I received his bicycle. Other years I worked for the farmers, mostly Boyd Stice, hauling and pitching into the viners. My father was foreman for the RMPC viner for many years.

The vine stack was owned proportionally by the farmers who brought in the peas and they used it for cattle feed in the winter. The souring stack of vines was called pea silage and as it fermented, it had a unique and bad smell that could be experienced from quite a distance, especially in the winter when the farmers disturbed the stack to retrieve their share for their cattle. The pea juices ran in small streams away from the stack and at least once some pigs got loose from their pen and came to the viner, drank of the juices and were staggering around as if drunk (I suppose they were). 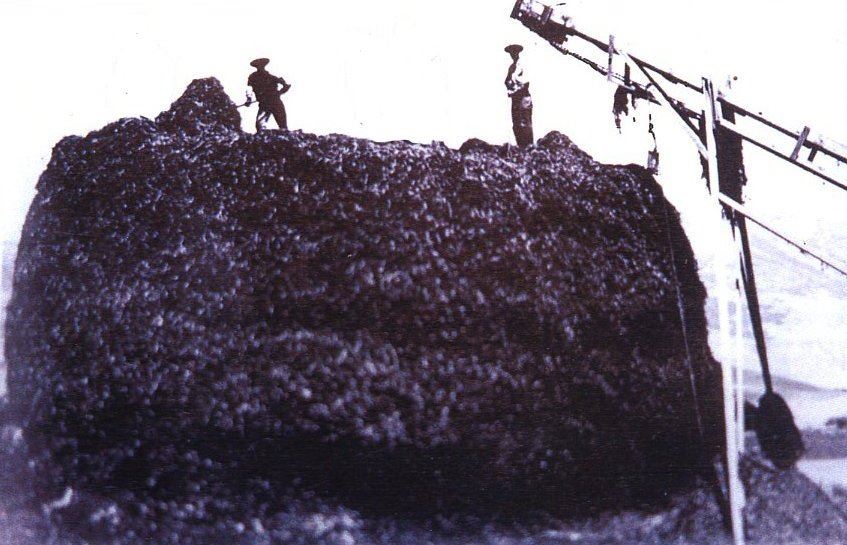 Innovations in pea harvesting were frequent and varied. They included a "pea-puller" which was a many-tined forklift attached to the front of a tractor. The fork tines were spaced the same as the pea rows and the fork would be the same width as the length of the wagon or truck. This fork would be pushed down the rows, pulling the peas up by the roots instead of cutting them off. The tractor would then load the peas directly on the wagon or truck. Another innovation was to use a hay swather to cut the peas, then load them with a hay loader. The next innovation was mobile viners that were pulled by a tractor, picking up the peas left in a windrow by the swather and processing them right in the field. Next came the self-contained, self-propelled types which were probably never used in Highland – they were used where huge acreages were common, in the Midwest and California.

There have been dramatic changes in Highland since those days. Pea viners, canneries and sugar factories all disappeared in the 1970's and Highland has become an upscale community of huge homes, small gardens and few animals. The agrarian atmosphere of North Utah County has almost disappeared since orchards of apples, peaches, cherries and apricots and fields of hay, grain, peas and sugar beets have been replaced by subdivisions of all similar colors and architecture. The only ones left who know much about farming are old men who are unfamiliar with cellphones and computers. Overalls have pretty much gone out of style.